The Awwwards Site of the Year 2012 has been chosen! Ladies and Gentlemen, we are pleased to present...

Throughout the year 2012 we had the pleasure of discovering and presenting to you day by day the best and most innovative websites which, standing out for their design, creativity, usability and content, are now part of the history of this exciting digital world of the web.

Agencies, studios and designers from around the globe presented their best offerings on Awwwards, the awards that recognize and promote the talent and effort of the best developers, designers and web agencies in the world, for the chance to gain well-deserved recognition for their work. More than 580 websites were awarded an Honorable Mention, but only 365 sites could be featured as Sites of the Day. They have been collected in our book of The Best 365 Websites around the World. Of these, just 12 became Site of the Month.

Today we have the honor of presenting to you the best website of the year 2012 on Awwwards, chosen by our brilliant and renowned jury made up of designers and recognized web professionals from all over the world.

by Dilshan Arukatti and Sylvain Tran 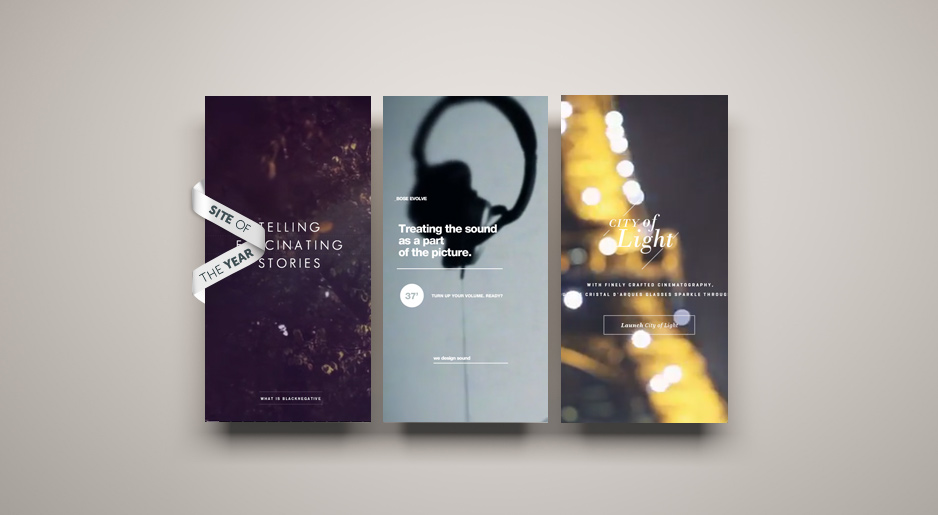 Blacknegative is a project that was runwith much enthusiasm by the team who created it. The site was designed by Dilshan Arukatti and developed by Sylvain Tran. Dilshan and Sylvain have been working together for many years now and are both dedicated into working on cutting edge projects.

Blacknegative is a multi disciplinary design agency composed of talented motion designers, art directors, sound designers and developers. The idea behind the site was to convey their philosophical approach of: Telling fascinating stories and to reflect the skills of the team.

From the very begining, our goal was to create a unique experience that would tell a story to the internet user as well as surprise him. We believe that every element helps telling the story: design, interactivity, animation... everything goes together and are tools which complete each other to convey a unique message.

The concept of the site lies in the diversity of its slides since each of them gets its own theme, its own universe, its own interactivity and design. What we wanted was to attrack the user’s attention so that he could discover the universe of Blacknegative while being amazed by the different interactive concepts of the site.

When we had to decide what technology to use, the choice was not easy to make since we did not know what the limits of html would be and we did not know how far we could actually go. At first, the idea was to create a site with flash since there was a lot of videos, much sound and interactivity that would need to be implemented. Moreover, another important aspect was that we wanted it to run perfectly on browsers such as IE7. Ultimately, after some experimentation, we realised that html turned out to be well adapted for what we wanted to do. Even though we knew that it would be difficult because there was not a lot of examples of sites similar to what we aspired to do and just as little available ressources, the idea of working on something new was so exciting that it was obvious we had to give it a try.

We had already created other html sites such as TheBullittAgency.com and Dubfire.com but Blacknegative was particularlly special to us as we wanted to go further than anything we had done previously in terms of creativity and technology. We wanted to prove that what matters the most is not the technology you use but the story telling and concepts used to interest the user.

So, first we worked on wireframes in order to give us a more precise idea about the navigation we wanted. Then, we started working on experimental trials. Sylvain ran tests on videos and differents browsers and Dilshan created videos on After Effect to visualise how the interface would work so that we would not have to develop everything to see the rendering. It is very important to be able to visualise the different interactions during the design process since it allows us to see UX problems in an early stage of the process without having to go through the development phase straightaway, which is much longer.

On many occasions during the conception and development we were not entirely happy with the rendering of some pages. We realised that some of them were not as good or not as advanced as others and because we wanted to go the furthest we could, we would take the concept from scratch and improve the site little by little. Of course, that was a long process and that is the reason why you can’t have a very strict deadline with projects like that. It is very important to take that into account when you work on cutting edge projects, at least if you really want the best for the project. Luckily, we did have that freedom, which enabled us to work each page further than what was wanted at first.

From the Awwwards team we give our heartfelt congratulations.