This is an ode to TV and movie microsites done right. We know how challenging it is for marketers and designers to create meaningful online experiences that add editorial value to campaigns and give something special to the fans, so we've decided to put together a list of microsites that did exactly that. Here's our selection of sites that turned a little corner of the almighty web, into a place where fans go with high expectations and don't leave disappointed. 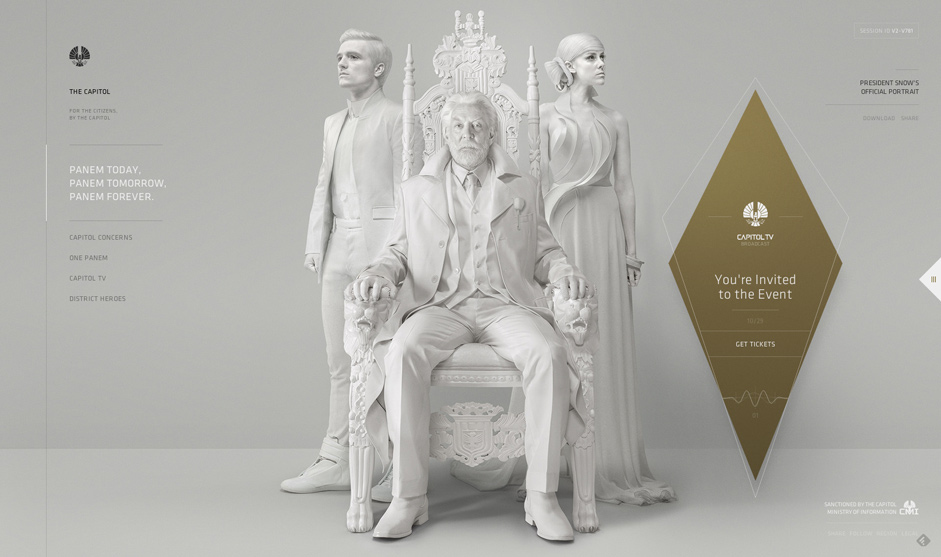 To preserve a peaceful and prosperous Panem, Watson/DG created TheCapitol.pn as a touchstone for Lionsgate’s Mockingjay: Part 1 digital campaign. The Capitol’s main hub focuses on the citizens of Panem, projecting unification and empathy through visual and textual cues. The site is almost entirely white, complete with video broadcasts from Snow, interactive WebGL content, and regularly updated content on Capitol TV. 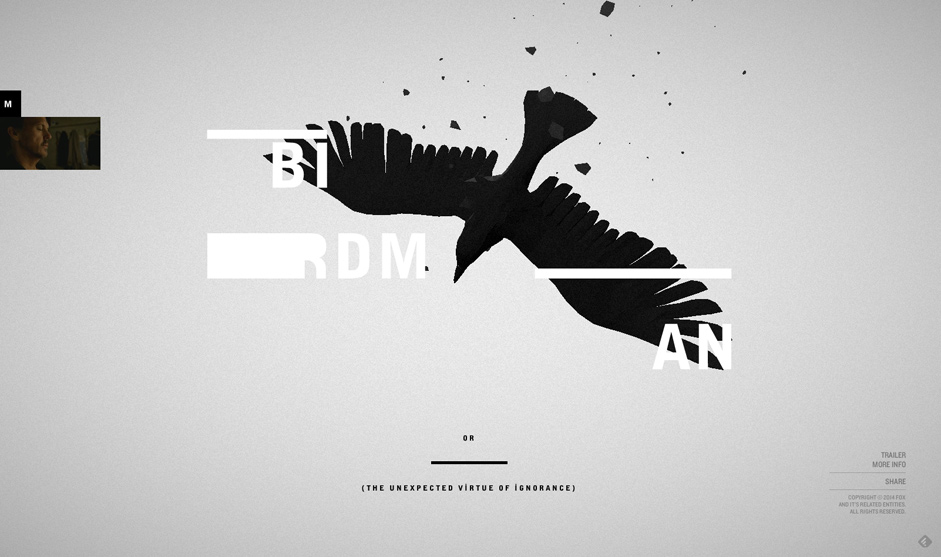 By combining audio and visuals, they allow the users to think and act like Birdman while gaining access to never before seen content. The site features a motion-centric bevy of impactful quotes on a background of GIF-form clips, all taken directly from the film and shareable on various social media sites. Through meaningful copy and carefully selected visuals, the designers are able to give the user an experiential peek inside the mind of a man desperate to matter. 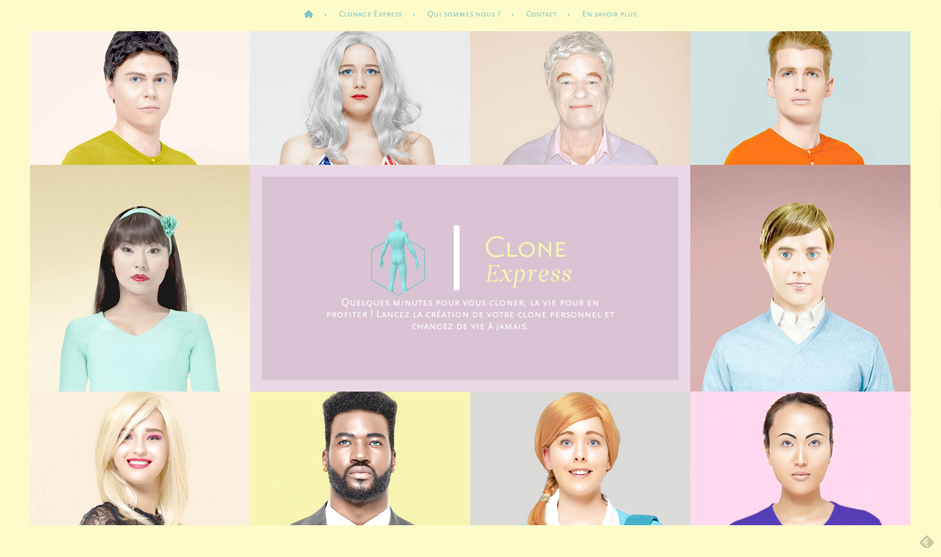 Atsugi Robotics is a website launched for the opening season 2 of Swedish TV series "Real Humans" and produced by Arte TV. This fake company specializes in robot cloning and encourages users to clone themselves through the digital module "Clone Express". A great level of effort is invested into creating an authentic and believable website, equipped with uncanny graphic content, testimonials and a preview tool that enables the user to create a digital clone. 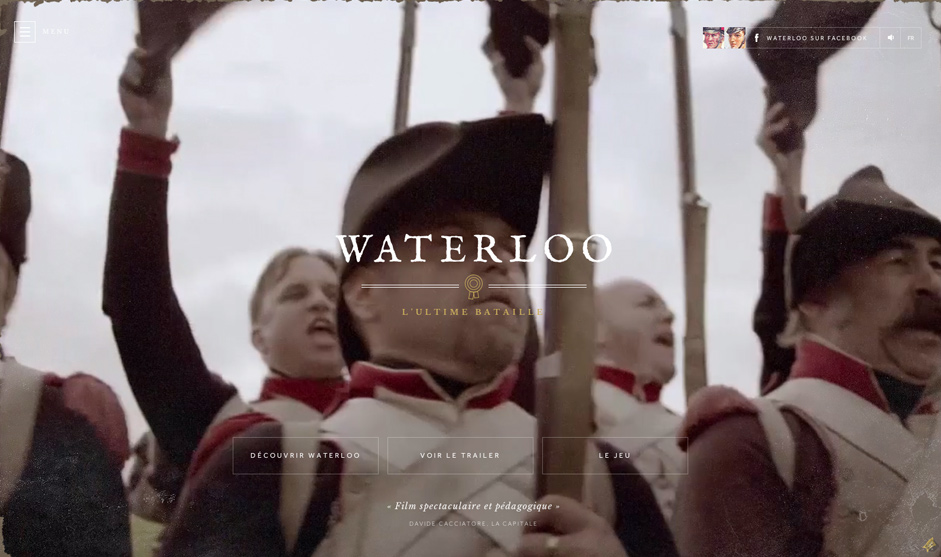 The official website of the movie retracing the history of The Battle of Waterloo plunges visitors into a gritty, muddy atmosphere, complete with dramatic music. Every part of the page is accompanied by the amazing soundtrack, high quality images and loads of behind-the-scenes content, including the 'Éxperience', where the military power of both sides is illustrated through a series of interactive infographics. 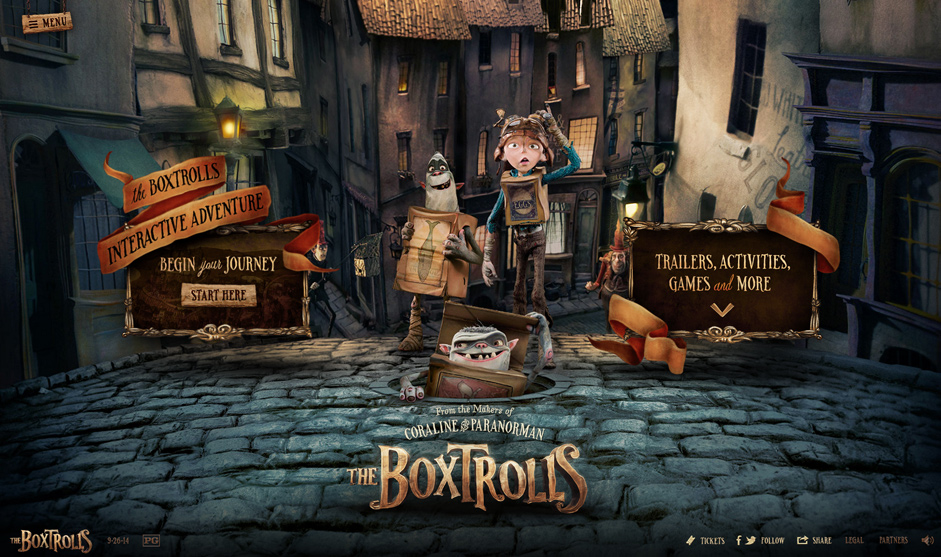 The official site for Laika's movie, "The Boxtrolls". An orphaned boy raised by underground creatures called Boxtrolls comes up from the sewers and out of his box to save his family and the town from the evil exterminator, Archibald Snatcher. The movie's microsite features loads of fan content, including games, activities, trailers, featurettes and an interactive adventure; all packed in a responsive, pleasurable and fun webpage both adults and children can enjoy. 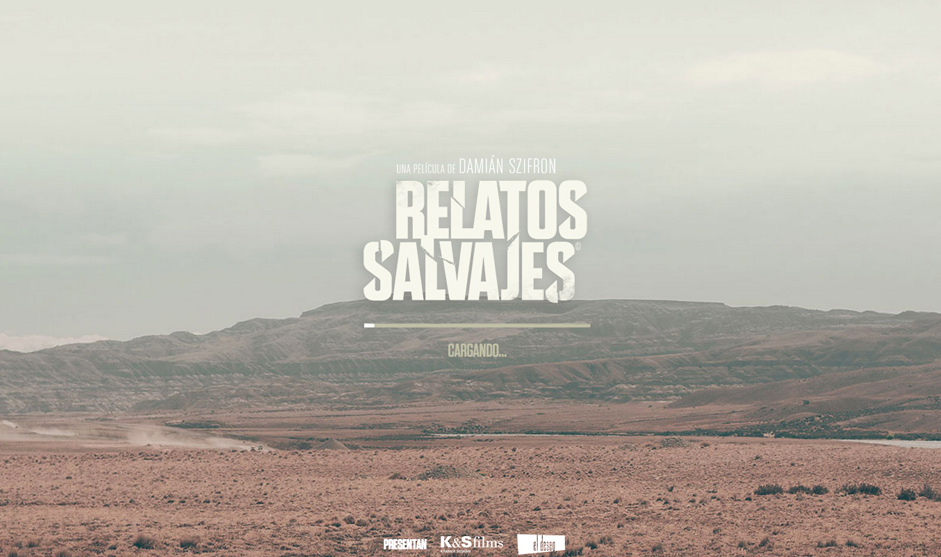 To accompany the movie critics praised as "terribly funny", the designers packed a vintage looking, single-pager full of interactive and tasteful media content; from trailers to cast interviews. The end result is a beautiful, responsive page that does a wonderful job promoting the movie. 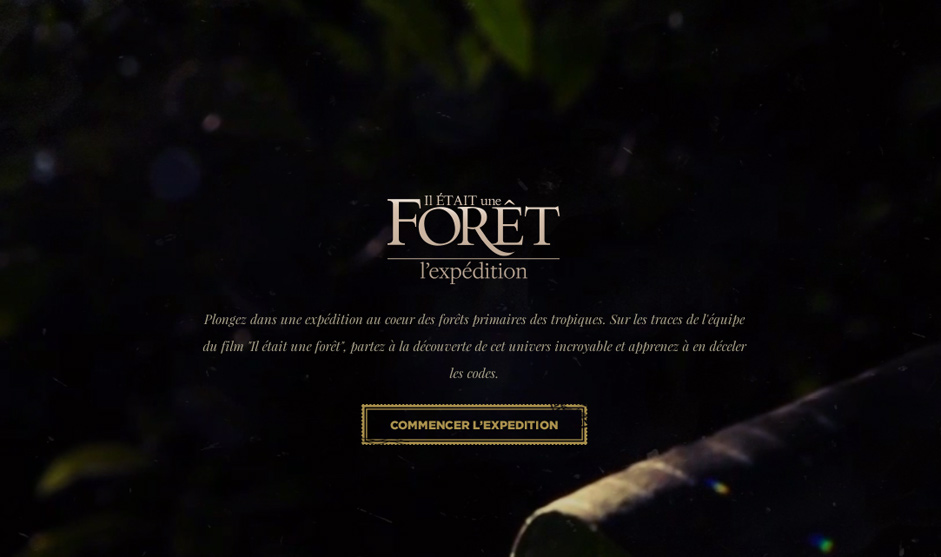 Immerse yourself in an expedition to the heart of the primary forests of the tropics. The page will take you on a journey following in the footsteps of the film crew Once Upon a Forest. Authentic sounds, images and videos, quizzes about the knowledge gathered during the virtual expedition and more besides. Wander through this incredible universe. 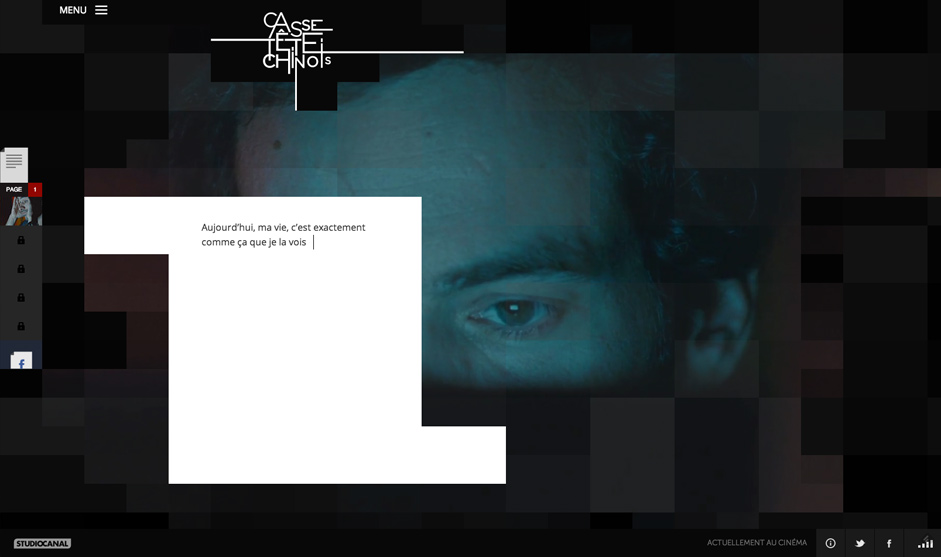 Chinese Puzzle is a French comedy-drama, directed by Cédric Klapisch, released in 2013. It is the third chapter of the Spanish Apartment trilogy, after L'Auberge Espagnole and Les Poupées russes. Inspired by one of the characters from Casse Tête Chinois (Chinese Puzzle) the microsite is a socially connected experience where Xavier is trying to organize his life! 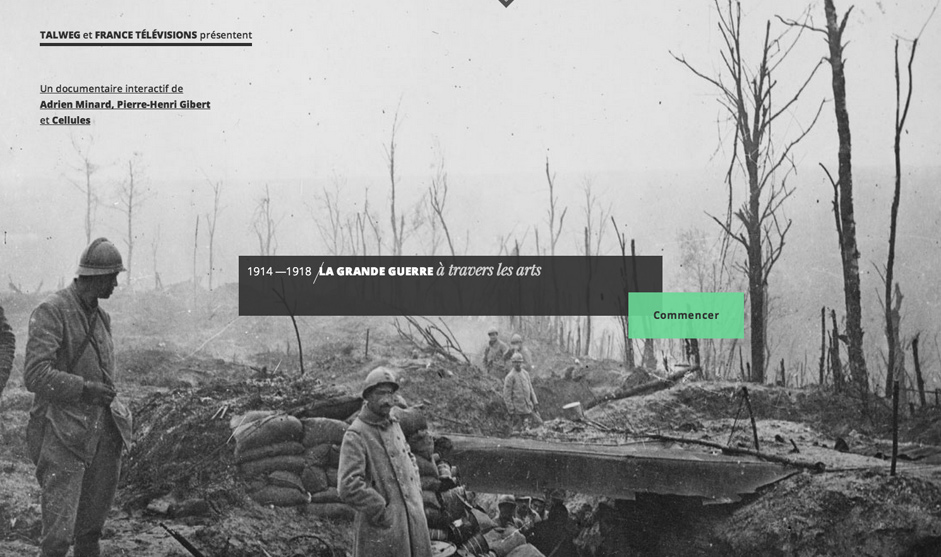 14-18 La Grande Guerre à travers les arts is an interactive documentary about the representation of WW1 through different art forms. It reveals the history of the Great War through artistic representations for which it was subject from 1914 to present day. Writers, painters, poets, expert analyses and wartime photography decorate the site. Stunning, seamless animation and navigation across the whole page take visitors on a compelling journey through the First World War. 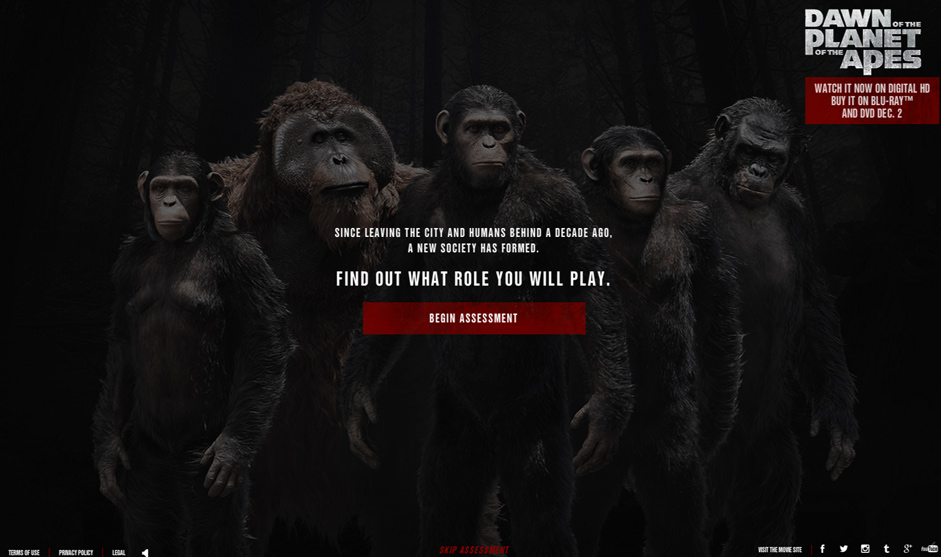 Moments Before Dawn is a tangible view into the separate communities of apes and humans, setting up the tension that exists before their fateful collision in “Dawn of the Planet of the Apes”. Videos, character profiles and a sinister atmosphere, together with a stunning graphic novel available online, create a perfect premise to attract and impress the fans before the long anticipated movie. 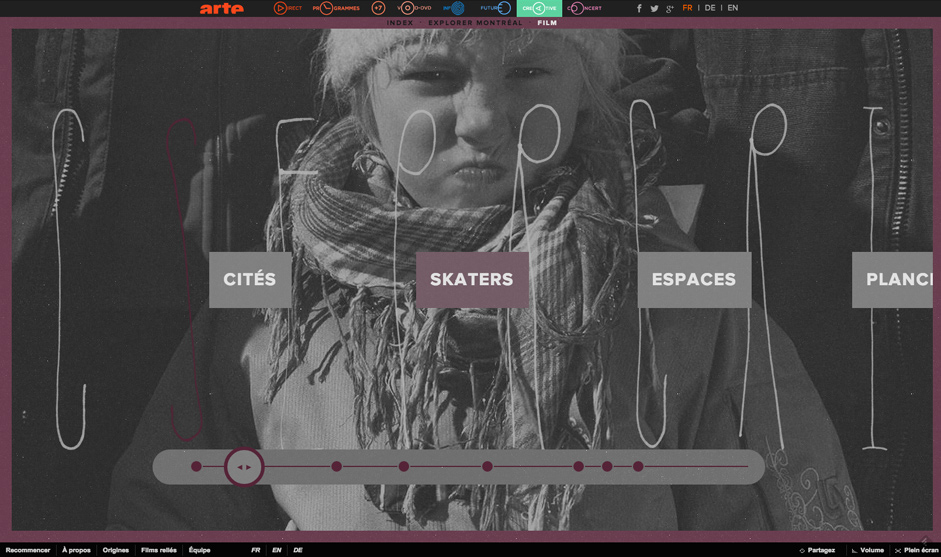 The Devil’s Toy Redux is a cinematic experience designed to open the audience’s eyes to the depth and breadth of the skate film genre. The eleven productions let the audience jump from country to country, theme to theme and era to era. The project honours skateboarding films, yet also ventures beyond trick shots to tell a powerful and universal story of rebellion, intolerance and the refusal of conformity. 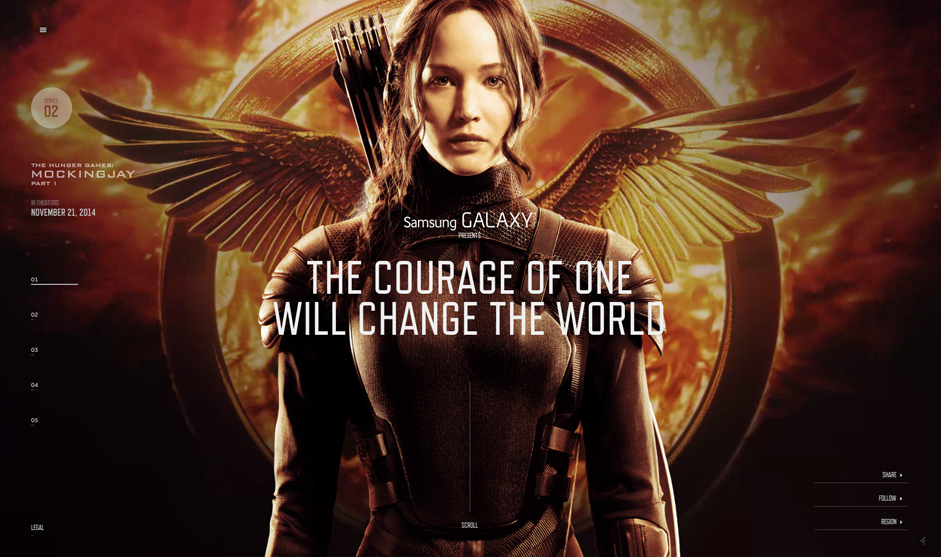 In this groundbreaking site, The Hunger Games Exclusive, debuts a first look into the upcoming Hunger Games: Mockingjay Part 1. The site is the first to offer insights from the filmmakers, and a look into the process of shooting two movies at the same time. The site continued to build buzz by debuting a fiery motion poster featuring the Mockingjay symbol. The reveal also included a page from the script along with a sweepstakes component to drive awareness. 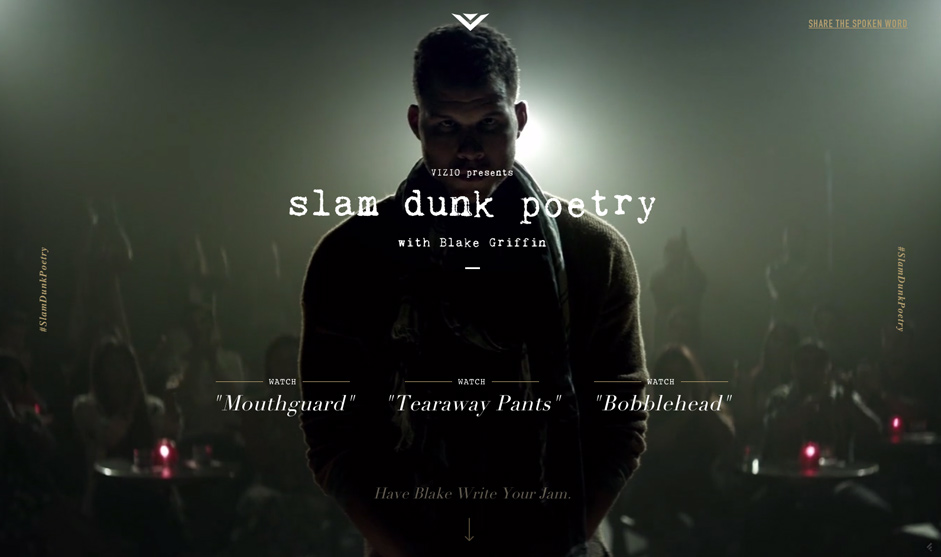 VIZIO presents Slam Dunk Poetry. Join Blake Griffin on his poetic journey as he finds beauty in the details of the game he loves. Listen to Blake's breathtaking performances, accompanied by stunning graphics. Then Give Blake some inspiration by telling him what you love and what you love about it and he'll write a special poem just for you.

14 – Diaries of the First World War 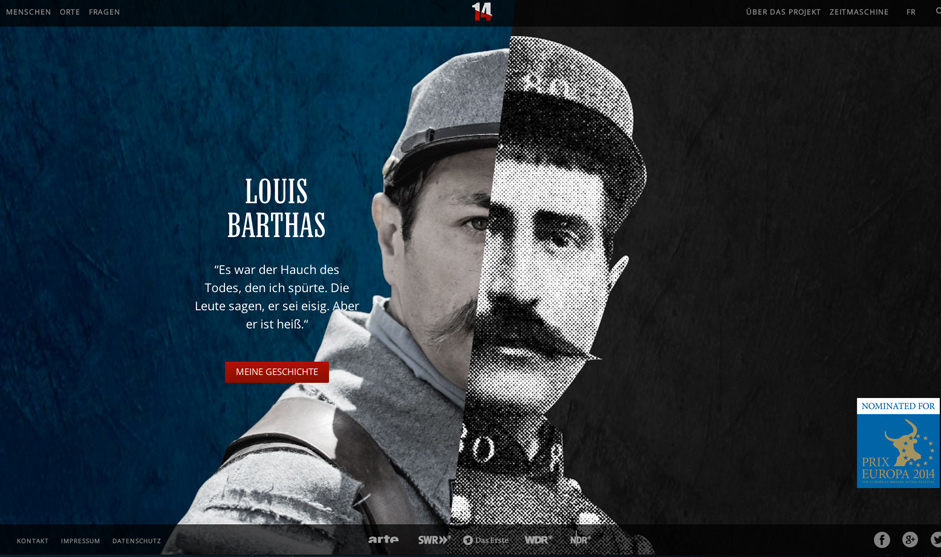 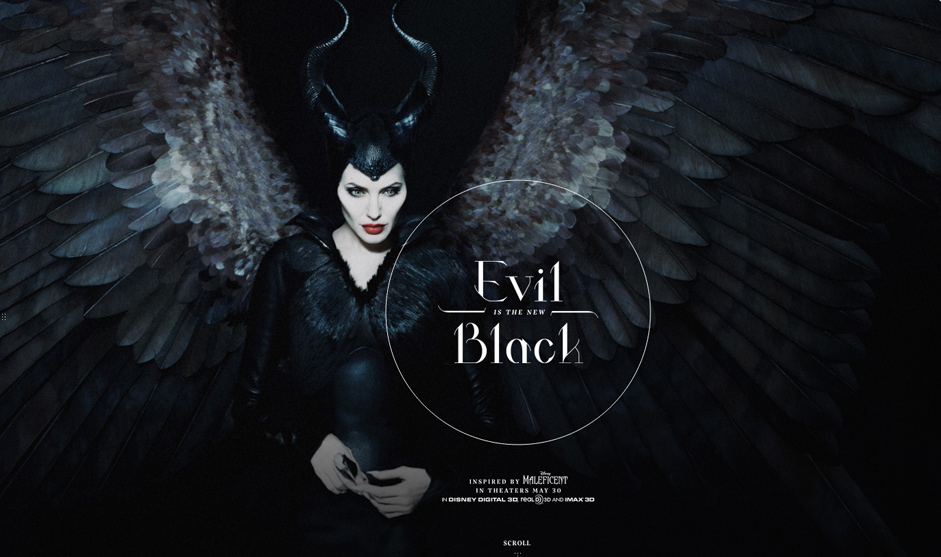 Evil is the New Black is a completely new take on a traditional EPK site. The site serves as virtual lookbook for the film's fashion, environments, characters, behind-the-scenes footage and more. Comprised of original static and animation content, custom video transitions, and hand-picked stock photography, the site provides a wealth of shareable material for both an active and passive audience. By aligning Maleficent's aesthetic with contemporary fashion, Evil Is The New Black generates awareness through thematically-driven content that is displayed in a narrative context. 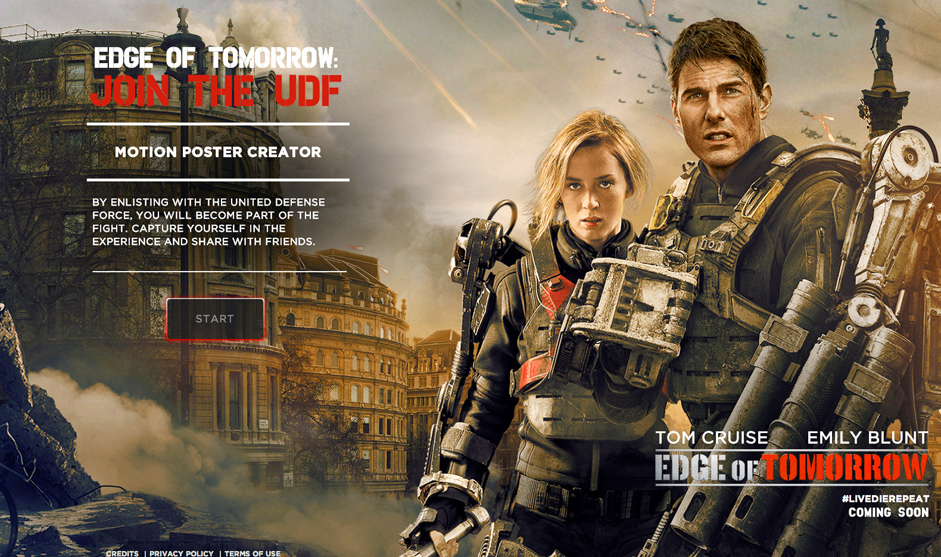 The motion poster creator microsite features FaceGen technology allowing users to become a part of the Edge of Tomorrow experience as they integrate their face onto a custom motion poster. 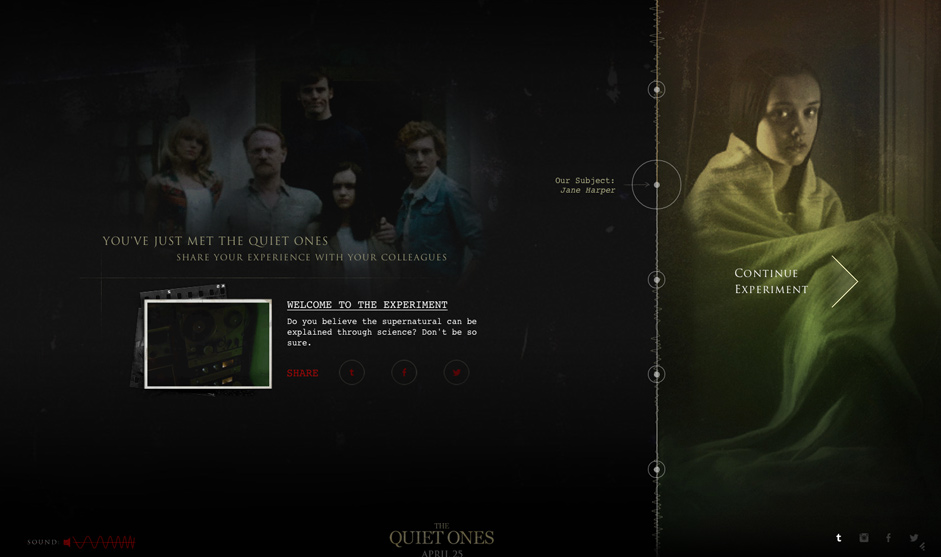 A rich interactive experience for horror film, The Quiet Ones. Start by signing a special agreement to allow Professor Coupland to conduct a series of experiments on Jane Harper. Enter the immersive experience of the movie, as an active part of the happening. WARNING: This is not a site for the squeamish. 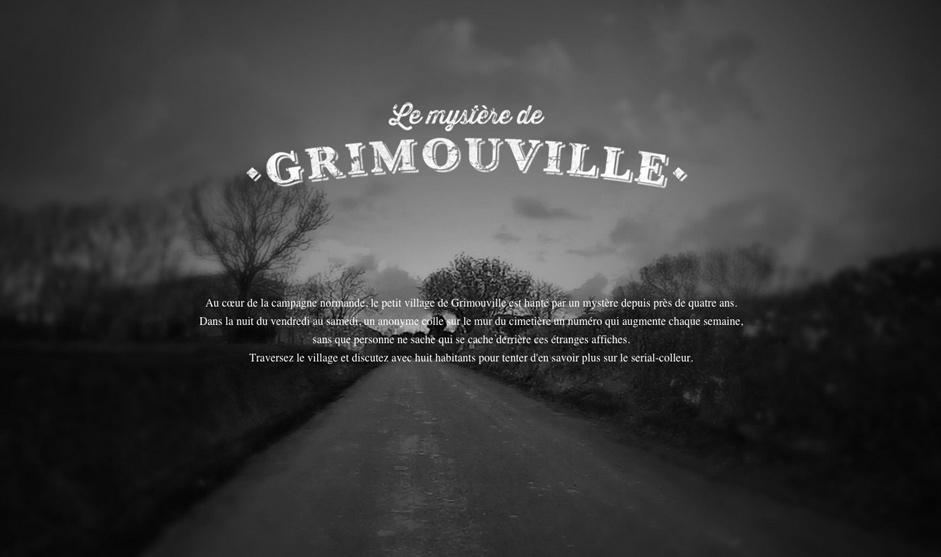 Something strange is happening in Grimouville, a small French town. Your job is to travel through it and explore the lives of its inhabitants in a tense, cinematic experience. Conduct your own research the old fashioned way - door to door - and see if you can solve the mystery of the unexplained numbers appearing in town! 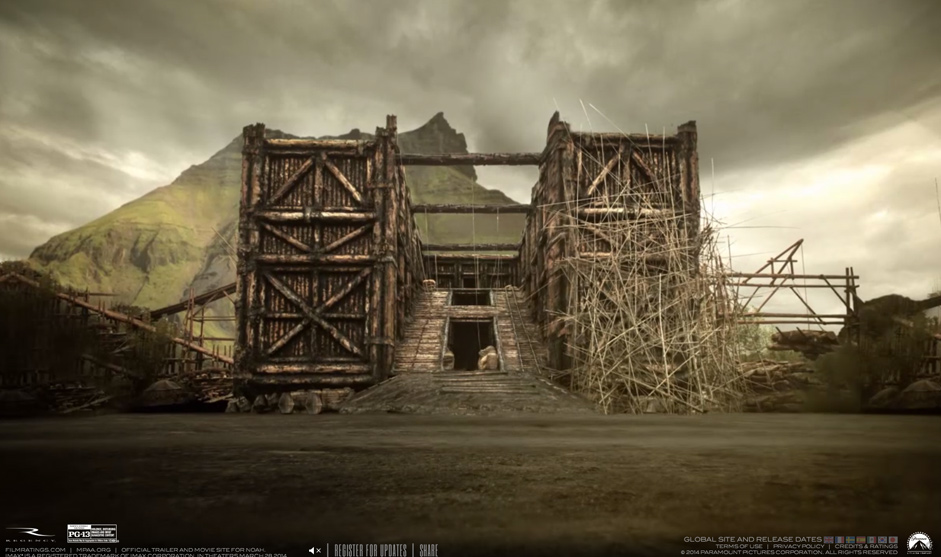 Digital Campaign for Darren Aronofsky's new film NOAH. The campaign follows a three-chapter narrative including teasers and an interactive experience that allows users to explore the three decks of NOAH's ark, learning more about the movie's background.

X-Men: Days of Future Past 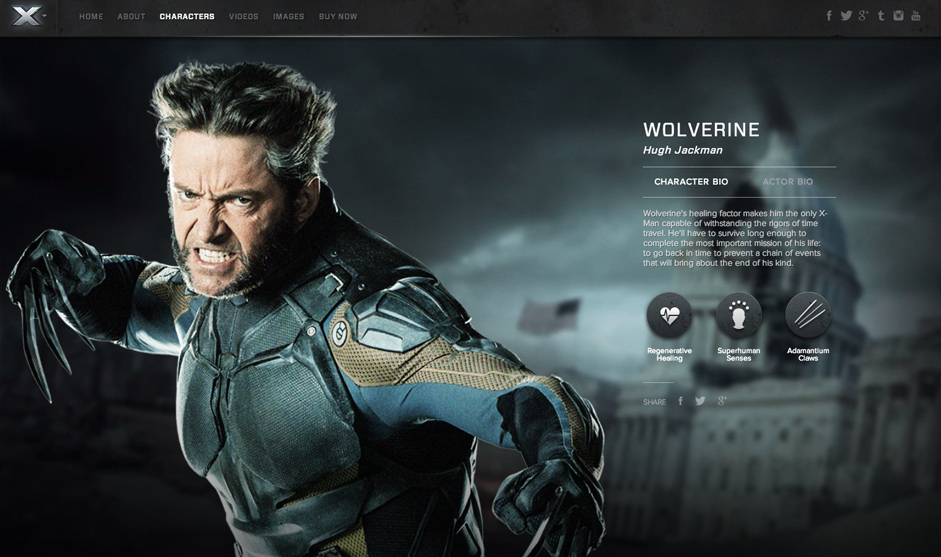 Timelines collide in the stunning new website featuring official movie posters, character galleries, videos and more. This is the essential hub for all for fans who want to explore the backgrounds of new and old characters, storylines and the world of X-Men. 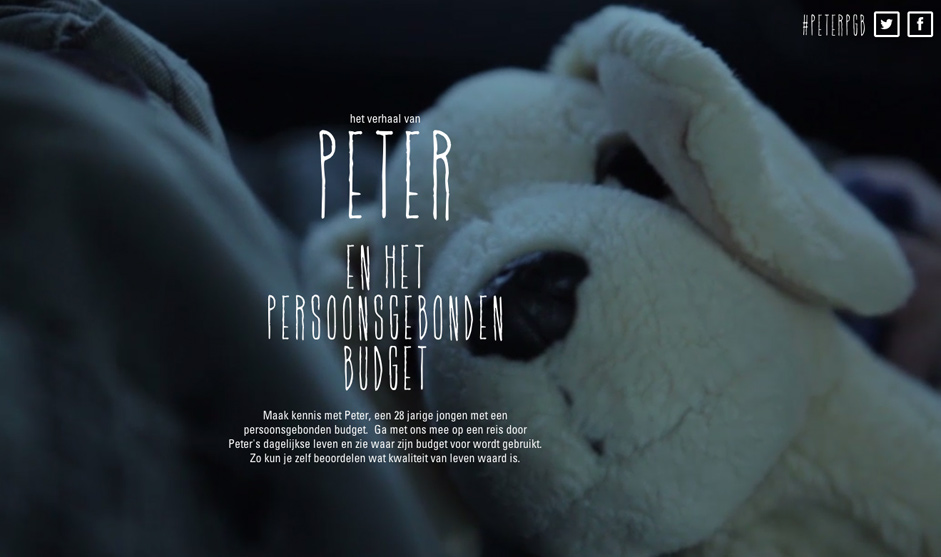 A Dutch interactive documentary about the life of Peter, a 28-year-old guy with a personal health budget. Do you think Peter is worth € 74.412? Explore Peter's life, activities, hobbies and the cost of health in this intuitive website experience. 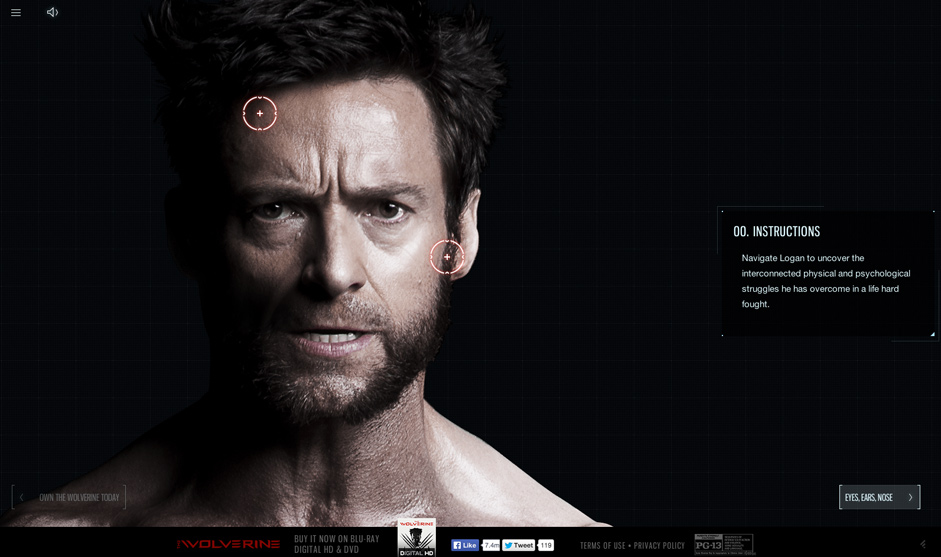 Explore the full-sized body of Wolverine in this multiplatform experience, part of the campaign to promote The Wolverine: Unleashed. Go deeper into the character to reveal the hidden physical and mental scars he has suffered throughout his mysterious life.